Try Something New With Me!

Hey everyone!
Have you ever sat around bored with your friends asking each other the age old question:

Well, This may help! Along with my friends, Carson Douglas and Tonya Blowe, we have decided that we didn't want to do that anymore. We have started a 52 week challenge to end that conversation or at least give some options to help.

Starting April 2nd, 2012 our new blog will go live. It's called Try Something New With me! The 3 of us have committed ourselves to doing something new to use for 52 weeks and then blog about it. This will not only give us options on what to do, but you too!

I don't want to speak for my friends, but I am open to suggestions. So if you've ever wanted to do something but just couldn't get up the money or nerve let me, outside of something seriously dangerous, illegal and out of my pocket range, I'll take a crack at it. What the heck!

My post day will be Wednesday, but be sure to stop by everyday to see what Carson and tonya have tried. You may find that something we've tried is right up your alley! :)

Try Something New With Me

Dana
http://www.danalittlejohn.net/
Posted by Author Dana Littlejohn at 7:45 AM No comments:

Hmmm, the perfect marriage? Depends on who you ask! :) 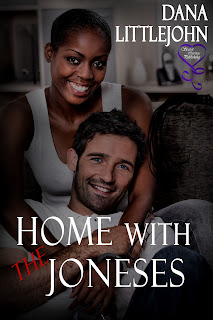 After a stressful day at work in the world’s most aggravating city, all Reyna Jones could think about was getting home to her darling husband to unwind, but he was not there when she arrived. That was a problem.

The meeting took far longer than Reyna expected. She left the work fifteen minutes pass her usual time rushing to catch her train. Her building was equipped with an enclosed tunnel to the subway making it easily accessible in inclement weather. When she arrived on the platform however she saw the last car disappear into the tunnel leaving the station. She frowned.
“Don’t worry. I missed it too, but it’s rush hour. Another will be along in about ten minutes.”
Reyna turned to see an old man taking a seat on the nearby bench. She knew that, of course, but it wouldn’t be the express she usually took home. The local would be next and that train hit every stop instead of just the main stations thus adding another half hour to her ride.
“Thank you.”
He nodded and smiled at her. Reyna walked to the other end of the platform to wait. The man’s prediction was correct. It was just under ten minutes before another train roared into the station. Filled almost to capacity, people of all shapes and sizes adjusted themselves letting Reyna she squeezed onboard. The car lunged forward and she reached for an overhead handle to stabilize herself. Falling wasn’t a real concern because of the sardine like conditions, but she held on anyway.
Reyna thought of the express train she missed and blew out a breath. Her ride would have been ten minutes by passing most of the stops she experienced now. The local not only added another half hour to her ride, but because it was longer it was too hot with too many smells and none of them were pleasant. When her stop finally came shoved people out of her way and burst free onto the platform blowing out a loud frustrated breath.
Slowly she took the long staircase and emerged into the bright light of the early evening sun. Blocking the light with her hand, she untangled the shades from her hair secured them on her face then wiped the rolling perspiration from her brow. Having temperatures near ninety degrees in September was uncommon for New York City. Although pleased to be out of the sweltering air of the overcrowded train-car the late day heat offered her no real relief. Commuting from Manhattan to Brooklyn was a daily chore, but along with the meeting that extended pass its allotted time and dealing with wearisome employees all day she was exhausting. Reyna looked forward to the relaxing bath she would soon be in.
Reyna’s pumps clicked rhythmically against the hot concrete as she walked along the street leading to her apartment building. Her purse dangled from one hand and her jacket from the other. The heat rose from the asphalt warming her legs and making her white linen pants almost unbearable to wear. Even the sheer material of her sleeveless pink blouse did nothing to cool her off.
The walk wasn’t as long as her sore feet made it feel. Reyna entered the building a short time later and slumped against the wall in the coolness of the lobby to wait for the elevator. She watched the lights above the wide metal doors as they lit the descending numbers brightly.
“Hello Reyna,” a woman greeted when the doors slid apart.
“Hi Mrs. Beck.”
“You poor thing, you look absolutely worn out. Summer just won’t let go. This dreadful heat just sucks the life of people,” Mrs. Beck commented with an air of concern.
Reyna smiled at her elderly neighbor. “I’m fine, Mrs. Beck. I just need a hot bath, some food and hug from Marc and I’ll perk right up.”
Mrs. Beck laid a hand on her chest. “Oh, that is so sweet. Michael and I used to be in love like that. God rest his soul. I will let you go sweetie. You tell Marc I said hello.”
“I will. Have a good evening.”
Reyna let the woman hug her before she entered the waiting elevator. She pulled her keys from her purse then hit her desired floor. A small smile touched her lips as she walked down the hall to her condo. Her smile widened as the welcomed an even cooler breeze that washed over her caressing her heated skin.
“Ahh,” she said closing the out the heat.
Letting her head fall back, her lids lowered and Reyna kicked off her shoes. Suddenly her eyes popped open and her brows scrunched in confusion. She crooned her head to the left. The living room furniture was unchanged from that morning. The small foot stool still sat in front of the lounge chair and the black leather chair was no where to be seen.
“Hmm.”
Reyna pushed herself upright. Her brow rose as she angled her head straining her hearing. The place was silent. No running water. No music. Nothing. She laid her keys and jacket on a table along the wall and padded across the foyer.
“Marc?” she called out going down the hall.
Passing the kitchen she noticed it had been done, no cups resting on the counter and the breakfast dishes were clean and neatly stacked in the rack, but was also empty. Reyna continued down the hall. Their bedroom door was opened and also unoccupied. She looked at her watch and her lips twisted in displeasure.
“Hmm, well we’ll just have to correct that, aren’t we?” she murmured.

Get yours at Secret Cravings Publishing
Posted by Author Dana Littlejohn at 4:09 PM No comments: