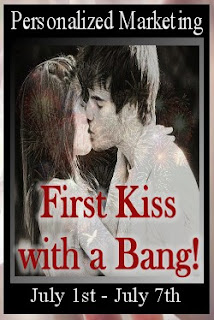 Welcome to my blog! In case you don't know I am Dana Littlejohn, author of sensual romance. I’m glad to be a part of Personalized Marketing’s first blog hop. First I will tell you about my own first kiss then I will show you a first kiss from one of my books.

I think I was about 13. Other girls my age been experimenting with kissing. Since they had already been visited by Mother Nature their developed bodies made their search for willing test subjects much easier than my own. Being the late bloomer that I was, I didn’t have as much luck. My kiss came from a friend, Robert. He was on the weird awkward scale as well so we decided to practice on each other.

Robert said he watched his older brother’s plenty of times and knew just what to do. So, following his lead we went to the park, climb the bleaches at the softball field and sat very close. He slid his hands across my cheeks then widened his fingers to grip the back of my head drawing me in. My breath caught. He stared right into my eyes. I couldn’t close them. My heart was racing. I was stuck, hypnotized, afraid of messing anything. I wanted to remember the moment for the rest of my life.

The moment our lips touched I exhaled. They were soft and warm. In a split second the moment changed from exciting to disgusting. Robert sucked my lips into his mouth like they were spaghetti noodles. His tongue lapped noisily across my mouth and cheeks. He continued to hold me in place while he slobbered on my face. I had to beat his chest and arms before he finally released me. I stomped away wiping my face swearing I would never do it again. My first kiss was not only messy it freaked me out for years! I was almost 17 before I let someone talk me into it again. Thankfully it was much better that time or I don’t know what I would have done.

Now here is the first kiss between Lord Charles DeWitt and Angel from Charles’ Goddess. 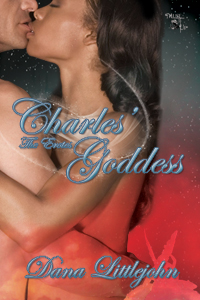 Charles stalked down the hall. Turning into his study, he slammed the door behind him.
“Damnation!”
He stood before the window with his arms tight around his chest. A soft knock at the door moments later was answered with a bark.
“Come!”
“May I offer my assistance, sir?” William’s soothing voice inquired behind him.
Charles spun his fist tight at his sides. “That is the most insufferable woman I have ever met, William. Surely the gods are playing a cruel joke on me to say that she is my match!” he thundered.
William gave Charles a knowing smile. “She is very…unique in many ways, my lord.”
Charles’ eyes gaped in amazement. “Unique? You use the term too loosely, old friend.” He pointed at the door. “That woman is arrogant, rude and much too plain spoken for any woman!” he corrected. “Do you know she had the gall to dismiss me from my own bedroom!”

available now at Muse it Hot!
Posted by Author Dana Littlejohn at 3:00 AM 1 comment: